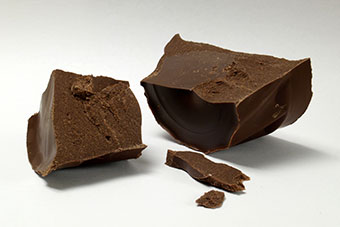 Studies have shown that dark chocolate (not the sugary treat), is full of antioxidants, and can improve health and lower the risk of heart disease.


The bioactive plant compounds found in cocoa beans, called polyphenols, may help protect against heart disease. "What we're learning is that polyphenols ... seem to improve the health of our blood vessels," says Dariush Mozaffarian, dean of the Friedman School of Nutrition Science and Policy at Tufts University. One study revealed that eating chocolate 2 or more times per week lowered the risk of having calcified plaque in the arteries by 32%. Eating chocolate less frequently had no effect. 1

ORAC stands for Oxygen Radical Absorbance Capacity. It is a measure of the antioxidant activity of foods.

Unprocessed cocoa beans and dark chocolate are among the highest scoring foods that have been tested, and are loaded with organic compounds that are biologically active and function as antioxidants. These include polyphenols, flavanols, catechins, among others. As shown above, dark chocolate contains more antioxidant activity than even blueberries and other fruits with large amounts of antioxidants.