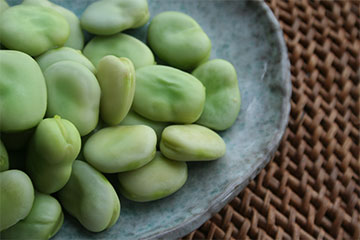 Fava beans are a good source of dietary fiber, protein, phyto-nutrients, folates, vitamin b-12 , and levo-dihydroxy phenylalanine (l-DOPA) the precursor of dopamine. Fava beans (or broad beans) are also being tested for use in the management of Parkinson's disease.


The term phytonutrients is a broad name for a wide variety of compounds produced by plants. Fruits and vegetables and other plant based foods such as whole grains contain phytonutrients. Fava beans are rich in phytonutrients such as isoflavone and plant-sterols. Isoflavone has been found to protect against breast cancer in laboratory animals. Phytosterols, especially beta-sitosterol, help lower cholesterol levels in the body, and have anti-inflammatory properties. Clinical studies have suggested that these health-promoting components, affect the immune system in ways that help to protect the human body against cancers.


Beans and other member of the legume family are growing in the popularity due to their health-promoting components such as saponins. Saponins are naturally occurring compounds that are widely distributed in the cells of legume plants. Saponins decrease blood lipids, lower cancer risks, and lower blood glucose response. A high saponin diet can be used in the inhibition of dental caries and platelet aggregation, in the treatment of hypercalciuria in humans, and as an antidote against acute lead poisoning. In epidemiological studies, saponins have been shown to have an inverse relationship with the incidence of renal stones. During soaking and blanching, portions of saponins are dissolved in water and lost in the soaking, washing, and blanching liquors. An optimum thermal process can increase the stability and maintain the saponins in canned bean products, which is useful for assisting the food industry to improve thermal processing technology and enhance bean product quality. 1

These statements have not been evaluated by the FDA. Fava beans are not intended to diagnose, treat, cure, or prevent any disease.  Fava beans are a food, not a drug or dietary supplement.